Lima Beans belongs to the legume family belonging to Central and South America. The scientific name for lima bean is Phaseolus lunatus. "Lunatus" means "half-moon," which refers to the shape of the bean.

What is another name for lima beans?

Did you know lima beans are named for a city in which country?

The name of the bean comes from Peru’s capital city, Lima.

How to grow lima beans step by step?

Materials to grow plants at home in a cup are:

STEP 1. Fill the styrofoam cup to the top with soil (you can use potting soil). Make sure the cup is not completely packed with soil. Otherwise, it will not be breathable.

STEP 2. Make a hole in the center of the cup with your finger or small stick to a depth of 1 inch.

STEP 3. Place the lima beans seed on the bottom of the hole. Then cover up the hole with soil and press the soil lightly. (Do not press the soil too hard).

STEP 4. Now gently moisten it by spraying enough water on the soil. Remember that beans grow best in moist soil rather than wet.

STEP 5. Place the cup in a place where it can receive at least six to seven hours of sunlight each day. Also, keep spraying water as necessary to keep the soil moist from time to time. 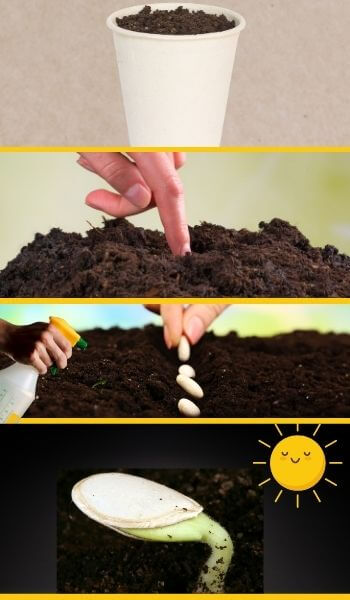 STEP 7. Monitor the growth of the Lima bean every day, and enjoy your gardening.
Related Article: Photosynthesis

The life cycle of a lima bean 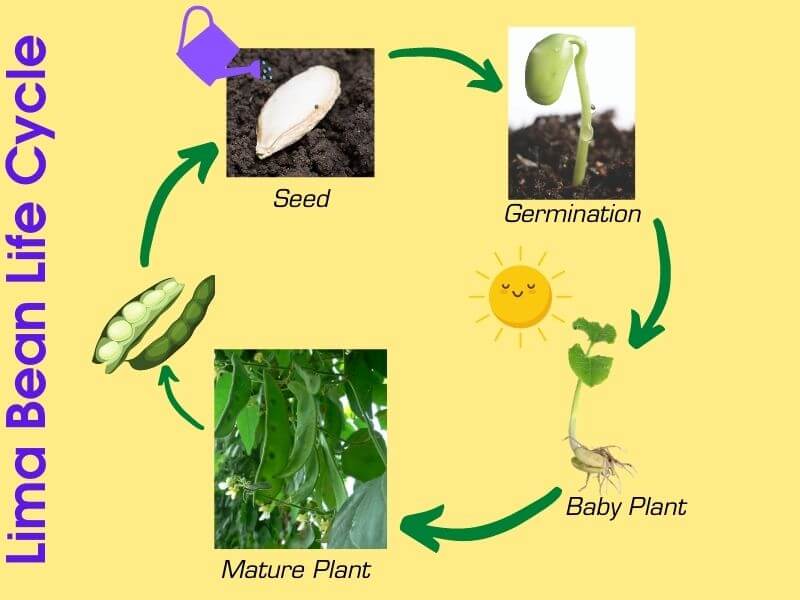 There are FOUR stages in the life of a lima bean plant.

The lima beans plant life cycle starts with a seed. From the outside, seeds are protected by a tough layer called Outer Coat. But inside, every seed contains a tiny plant and stored food.

After getting enough water, air, and sunlight, a seed germinates.

Germination is the process in which the baby plant emerges from the seed hard shell.

Roots from the germinated lima beans seed grow down into the ground. Did you know? Before a seed germinates, it is DORMANT (means alive but inactive).

A seedling grows out of the ground. A seedling is a young lima bean plant that grows after germination.

After a couple of days, Leaf growth begins on the plant’s stem and starts growing towards the sunlight. It takes around 2-3 months for the seedlings to become a mature plant of lima beans.

When a plant becomes mature, it starts to grow flowers, and flowers are the plant’s reproductive part. It makes seeds, which in turn make new plants.

And then the cycle begins AGAIN.

FACT 1. ➤ The scientific name for lima bean is Phaseolus lunatus. “Lunatus” means “half-moon,” which refers to the shape of the bean..

FACT 2. ➤ It is said that lima beans originated in Guatemala or Peru where it was grown for over 7000 years.

FACT 3. ➤ After the discovery of America by Columbus, Lima beans were introduced into South America. In South America, lima bean cultivation was started 6000 years BC.

FACT 4. ➤ It is known as “butter beans” because of its buttery taste after cooking..

FACT 8. ➤ Fruit of lima beans is green pods that are flat, oblong, and slightly curved, averaging about three inches in length. 2-4 flat kidney-shaped seeds reside within the pod that we commonly refer to as lima beans.

FACT 9. ➤ West Cape May, New Jersey, is home to a Lima Bean Festival, held every October.

FACT 10. ➤ Lima beans are an important ingredient in the succotash recipe, a Native American famous dish that combines the lima bean with corn, okra, tomatoes, and other vegetables.

FACT 11. ➤ While there are many varieties of lima beans, the most popular ones in the U.S. are the Fordhook, commonly known as the butterbean, and the baby lima bean.

FACT 12. ➤ Lima beans are a good source of fiber, protein, B vitamins, molybdenum, magnesium, and iron.

FACT 13. ➤ According to Oklahoma State University, there are THREE main varieties of Lima beans: large, small, and dwarf beans..

FACT 14. ➤ Lima bean is very popular in the USA, where an average citizen consumes 0.3 pounds of lima bean per year.

FACT 15. ➤ Fresh lima beans are difficult to find in the U.S. due to small crops and regulations. Most lima beans are found canned, frozen, or dried.