Jupiter is the 5th closest planet from the sun. It is the biggest planet and also called the Gas Giants. The distance from the sun to Jupiter is over 483 million miles. Our Jupiter facts for kids will give you lots of amazing and interesting facts about Jupiter. 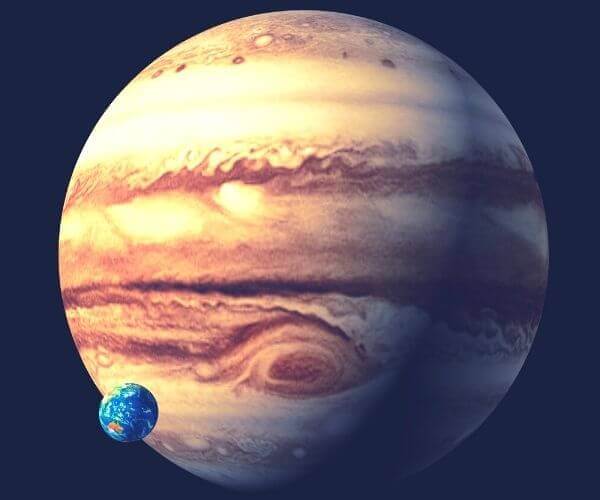 Below, we have prepared a list of best interesting facts about Jupiter. Maybe some of them you will already know but some Jupiter facts for kids will definitely surprise you. So let’s start the amazing journey of Planet Jupiter.

FACT 1. Jupiter is named after the Roman king of the gods.

FACT 2. Jupiter was the first Planet created in the Solar System.

FACT 3. The distance from the Sun to Jupiter is approximately 484 million miles (779 million km).

FACT 4. Jupiter has 67 moons which are separated into groups.

FACT 5. Jupiter’s four largest moons are called the Galilean satellites discovered by the famous astronomer Galileo Galilei in 1610. These moons are Io, Europa, Ganymede, and Callisto.

FACT 6. Ganymede is the largest moon in the solar system. It is larger than the planet Mercury.

FACT 7. Io, one of the moons of Jupiter has more volcanoes than any other planet in the solar system.

Did You Know?
” Ganymede is the largest moon in the solar system. It is larger than the planet Mercury.”

FACT 8. As Jupiter is very away from the sun, the temperature on Jupiter is around -230 degrees which are very cold.

FACT 9. The planet Jupiter is one of the five planets which are visible from Earth with the naked eye.

FACT 10. One orbit of the Sun takes Jupiter, about 12 Earth years but a day on Jupiter is only 9 hours, 56 minutes i.e less than half a day on Earth.

FACT 11. Jupiter has the thickest atmosphere that is made up mostly of hydrogen (H2) and helium (He).

FACT 12. Jupiter does not experience seasons like Earth and Mars because the axis is only tilted by 3.13 degrees.

FACT 13. Jupiter is so big that the Earth would fit into Jupiter more than 1,300 times.

FACT 15. Jupiter’s Great Red Spot is more than twice the size of Earth! It is a huge spinning storm.

Must visit the website of NASA to know more fun facts about Jupiter for kids.