Neptune is the eighth and farthest-known Solar planet from the Sun. It is known for its beautiful blue color. Our Neptune facts for kids will give you lots of cool and interesting facts about Neptune. 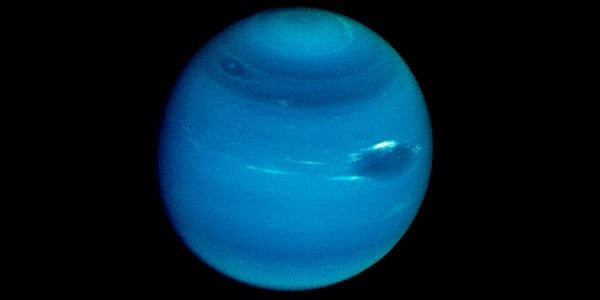 Neptune is the eighth planet from the sun and the most distant in the solar system. While it is the third largest planet with respect to mass, it is only the fourth largest in terms of diameter. It is also our solar system’s windiest world.

Due to its beautiful blue color, Neptune was named after the Roman god of the Sea, Poseidon.

Below, we have prepared a list of best interesting facts about Neptune. Maybe some of them you will already know but some Neptune facts for kids will definitely surprise you. So let’s start the amazing journey of Planet Neptune.

FACT 2. Neptune is the Coldest and windiest Planet in the Solar System. The average temperature on Neptune is about -221.45 degrees Celsius (-366.6 °F).

FACT 3. Due to its beautiful blue color, Neptune was named after the Roman god of the Sea. In Greek, Neptune is called Poseidon.

FACT 4. Why is Neptune Blue? Neptune’s atmosphere is made up of hydrogen (80%), helium (19%) and trace amounts of the methane. The methane absorbs the red light from the sun but reflects the blue light back into space. This is why Neptune appears blue.

FACT 5. The ice giant Neptune was the first planet located through mathematical calculations.

FACT 6. Neptune was discovered in 1846 by Johann Gottfried Galle using calculations by Urban Le Verrier of France and John Cauch Adams of Britain. Neptune is a joint British-French-German discovery.

FACT 8. Neptune is the smallest of the ice giants out of the two ice giants in the Solar System, Uranus and Neptune.

FACT 9. Neptune has the second largest gravity of any planet in the solar system – second only to Jupiter.

FACT 10. Neptune has 14 known moons which are named after sea gods. The largest of these moons is Triton – a frozen world that spits out nitrogen ice and dust particles from below its surface. Triton was discovered in 1846.

FACT 11. Triton, largest moon of Neptune is one of the Coldest Places in Our Solar System.

FACT 12. The only spacecraft that has ever visited Neptune was NASA’s Voyager 2 spacecraft in 1989. It captured the first close-up images of the Neptunian system. It took 4 hours and 6 minutes to send the signal from voyager 2 back to earth.

FACT 14. Neptune has a very active climate. The Great Dark Spot, one of the largest storms ever seen was recorded in 1989. It lasted about five years and is roughly the size of Earth.

FACT 15. Neptune is Lifeless due to its extreme temperatures and pressures. Neptune cannot support life.