Today we will explore the history of plate tectonics, different types of tectonic plates and some amazing facts about the plate. Let's begin.

Before understanding Plate Tectonics, we will know about Hundreds of millions of years old facts related to the Earth.

Do you know that our Earth looked completely different from today’s Earth hundreds of millions of years ago?

As we all know that we have SEVEN continents, but at that time, all the continents of Earth were stuck together in a huge supercontinent called PANGEA.

In simple words, you can say that billions of years ago, there was only one continent called Pangea. The “Pangea” word is a Greek word meaning “all the earth.“

A German meteorologist named Alfred Wegener theorized for the first time that this gigantic landmass split into chunks and slowly drifted apart. He created the idea of continental drift and wrote ‘The Origin of Continents and Oceans’ to support his theory.

Although the scientific community first rejected his theory, his ideas have been scientifically proven: The Earth’s crust is split up into dozens of pieces called tectonic plates, which float on top of the mantle.

What is Plate Tectonics?

The term ‘tectonics’ is a Greek word meaning ‘to build.’ Tectonic plates are huge pieces of land that connect to form the outer layer of the Earth.

There are mainly two types of tectonic plates: Continental Crust and Oceanic Crust

Continental Crust: The Earth’s outer rocky layer, made up of rocks that consist primarily of silica and aluminum called the “SIAL“

Oceanic Crust: Located below the continental crust, composed of an oceanic crust called “SIMA” Sima is made mostly of silicon and magnesium.

What are PlateTectonics made of?

Plate Tectonics are composed of both continental and oceanic lithosphere. The lithosphere is made up of the crust and the upper part of the mantle. These plates have irregular shapes and fit together, just like puzzle pieces.

Related Article – Layers of the Earth

How do plates move?

It is based on Convection Current theory. Convection currents transfer heat from one place to another by mass motion of a fluid or gas particles. 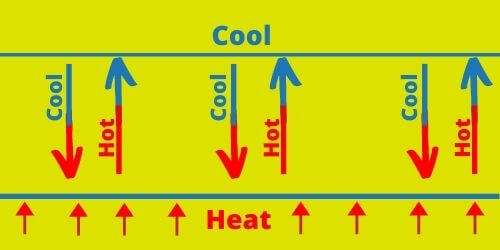 How many Tectonic Plates are there?

In all, the earth is divided into 12 plates.

Some of the secondary plates (also referred as minor plates):

What is the Plate Tectonics Boundary?

A tectonic plate boundary is the edges where two plates meet. These plates move slowly and continuously but in many different directions.

Based on the different movements, there are THREE main types of Tectonic plate boundaries: 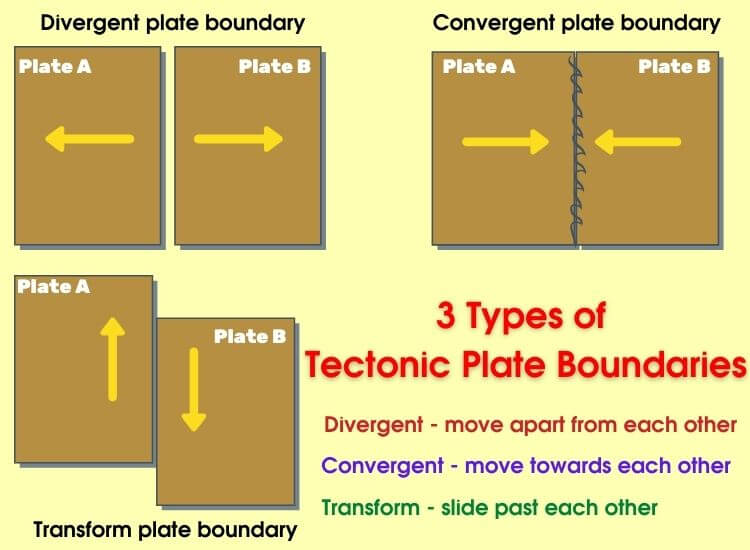 What is the Ring of Fire?

Related Article – Layers of the Atmosphere

FACT 1. ➤ The Pacific Plate is the largest tectonic plate on the Earth’s Crust.

FACT 3. ➤ There are mainly TWO types of tectonic plates: Continental and Oceanic crust.

FACT 4. ➤ Continental Crust is referred to as SIAL as it is composed of silica and aluminium.

FACT 5. ➤ Oceanic Crust is referred to as SIMA as it is composed of silicon and magnesium.

FACT 6. ➤ Earth tectonic plates float and move on top of the layer of the mantle known as Asthenosphere.

FACT 7. ➤ The Mariana Trench is the deepest part of the ocean. It is formed by a convergent boundary between the Pacific Plate and the Mariana Plate.

FACT 8. ➤ Plates move less than a few inches every year (about the same as your toenails grow.)

FACT 9. ➤ As tectonic plates press against each other, the pressure form Oil deposits, Natural gases, Coal and Metals.

FACT 10. ➤ The Himalayan mountains range including Mount Everest were formed because of the collision of Indian and Eurasian tectonic plates.

What are the 7 tectonic plates?

What is the smallest tectonic plate?

Who first proposed the idea of plate tectonics?

A German meteorologist named Alfred Wegener theorized for the first time that this gigantic landmass split into chunks and slowly drifted apart. He created the idea of continental drift and wrote 'The Origin of Continents and Oceans' to support his theory.

How big is a tectonic plate?

what tectonic plate is california on?

Mt. Fuji is a product of the subduction zone

What are Tectonic Plates?

The tectonic plates are a combination of the crust and the uppermost part of the mantle, also called the lithosphere.