Mars is the second smallest planet (Mercury is the smallest) and fourth planet from the Sun. This planet is named after Mars, the Roman god of war. Our Mars facts for kids will give you lots of amazing and interesting facts about Mars.

Mars is the fourth planet from the Sun. It is the fourth terrestrial planet along with Mercury, Venus, and Earth and also is the second smallest planet in the solar system. Terrestrial means it also has a hard rocky surface like earth. Mars is a reddish dusty, desert planet with ancient volcanoes, sand dunes, canyons, and many meteorite craters.

The planet is named after Mars, the Roman god of war. It is also known by the name of “Red Planet” due to its red color.

Below, we have prepared a list of best interesting facts about Mars. Maybe some of them you will already know but some Mars facts for kids will definitely surprise you. So let’s start the amazing journey of Planet Mars. 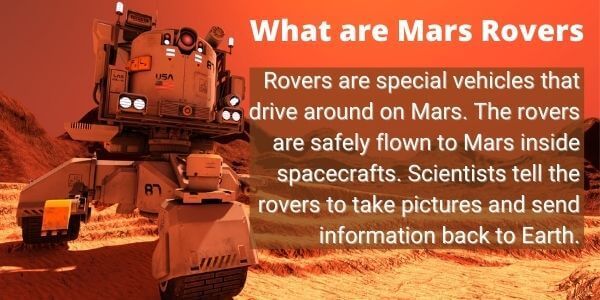 FACT 2. Mars is the second smallest planet in the solar system after Mercury.

FACT 4. Mars makes a complete orbit around the Sun in 687 Earth days. A day on Mars is 24 hours and 37 minutes –– only a little bit longer than a day on our planet.

FACT 7. There are NO rings around Mars.

FACT 8. Olympus Mons, the tallest mountain known in the solar system is on Mars with more than 22 km high and 600 km diameter.

FACT 9. Mars has a very thin atmosphere composed mostly of the tiny amount of remaining carbon dioxide (95.3%) plus nitrogen, argon, and traces of oxygen and water.

FACT 11. The first true Mars mission success was the Mariner 4 flyby in 1965.

FACT 12. Wernher von Braun was the first person to make a detailed technical study of a Mars mission.

FACT 14. It is believed that pieces of Mars have been found on Earth.