Saturn, the second largest planet in the solar system and is the sixth planet from the Sun. It is also known as “The Jewel of the Solar System“. Our Saturn facts for kids will give you lots of amazing and interesting facts about Saturn. 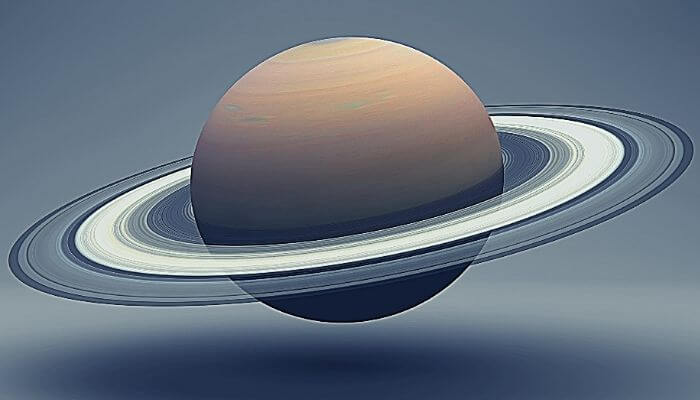 Saturn, a gas giant is the second-largest planet in our solar system after Jupiter. Saturn is the 6th planet from the sun.

As Saturn is made mostly of gases i.e Helium and hydrogen; so if we drop it in a big enough ocean it will float. Saturn is also the lightest planet in the solar system.

Below, we have prepared a list of best interesting facts about Saturn. Maybe some of them you will already know but some Saturn facts for kids will definitely surprise you. So let’s start the amazing journey of planet Saturn.

FACT 1. After the Roman god Saturn, the planet is named the father of Jupiter and the god of agriculture.

FACT 3. Titan is the biggest moon of Saturn and the second-largest moon in the solar system after Jupiter’s moon Ganymede.

FACT 4. Titan is even bigger than the planet Mercury. A thick, golden haze covers it.

FACT 5. Titan’s atmosphere is a mixture of nitrogen and methane, 50 percent thicker than Earth’s.

“ We’ll get a closer look at Titan in 2034 when NASA’s recently approved Dragonfly mission reaches there (it’s due for launch in 2026). When it reaches Titan, the Dragonfly spacecraft will deploy a 10-foot-long robotic drone equipped with propellers and skids. The drone will spend two and a half years exploring Titan and could give new insights into the chemical processes that paved the way for the formation of life on Earth“. source

FACT 6. Enceladus, one of Saturn’s smaller moons, reflects some 90% of the sunlight, making it more reflective than snow.

FACT 8. Saturn goes around the Sun very slowly. A year on Saturn is more than 29 Earth years.

FACT 9. Saturn spins on its axis very fast. A day on Saturn is 10 hours and 14 minutes.

FACT 10. Saturn is approximately 856 million miles away from the Sun.

FACT 12. It is also nicknamed “The Ringed Planet,” a nickname arising from the big and bright ring system that orbits Saturn. These rings are made from billions of pieces of ice, dust, and rock. Some pieces are as tiny as a speck of dust. A few pieces are as big as mountains.

FACT 13. The rings are named alphabetically based on when they were discovered.

FACT 15. We can see Saturn with our own eyes.

FACT 16. The Italian astronomer Galileo was the first to observe Saturn with a telescope in 1610.