Uranus is the seventh planet from the Sun, as well as the third largest in terms of size, the fourth largest in terms of mass, and one of the least dense objects in our solar system. Our Uranus facts for kids will give you lots of amazing and interesting facts about Uranus. 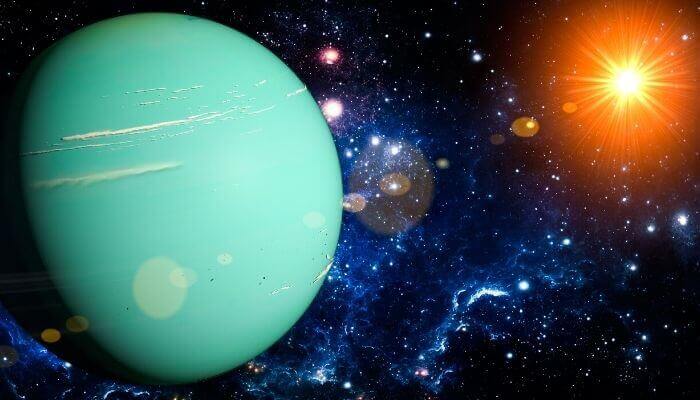 Uranus is the only planet in the solar system that takes its name from Greek (rather than Roman) mythology.

Uranus is the first planet that was discovered after the invention of telescope.

Uranus is known as the “sideways planet” because it rotates on its side. But it rotates east to west.

Uranus planet is full of interesting facts and surprising details. So let’s start getting to know these interesting fun Uranus facts for kids.

FACT 1. It was first seen by John Flemstead in 1690, but he felt like a star in the planetarium, not the planet. But on 13 March 1781 it was officially discovered by astronomer William Herschel. At first he thought it was a comet but after 2 years he accepted Uranus as an actual planet.

FACT 2. William Herschel originally tried to name his discovery “Georgium Sidus”, after King George III. But no one agreed to this name.

FACT 3. The name “Uranus” was suggested by astronomer Johan Bode. The name comes from the ancient Greek god Osanos who was the lord of the sky and husband of the earth.

FACT 5. Uranus has an atmosphere composed of hydrogen and helium like Jupiter and Saturn, but it also has methane. Uranus is blue due to its high level of methane.

FACT 6. Like saturn, Jupiter and Neptune, Uranus also has rings. Uranus has 13 rings made of dust, ice and bits of rock. Its inner rings are darker but the outer rings are brightly colored, which makes it easier to see.

FACT 7. Uranus is the only planet that revolves on its side. Uranus rotates in the opposite direction as Earth and most other planets.

FACT 8. Uranus turns on its axis once every 17 hours, 14 minutes. It means a day lasts a little over 17 hours on Uranus.

FACT 9. Uranus takes 84 earth days to revolve around the Sun. This means that one year on Uranus is equal to 84 years on Earth.

Did You Know?
” Uranus’ unique sideways rotation makes for weird seasons. The planet’s north pole experiences 21 years of nighttime in winter, 21 years of daytime in summer and 42 years of day and night in the spring and fall. source“

FACT 11. The moons of Uranus are named after characters created by the great writers William Shakespeare and Alexander Pope.

FACT 12. The largest moon of Uranus is Titania.

FACT 13. Saturn and Neptune are the neighboring planets of Uranus.

FACT 15. Uranus is also known as an “ice giant” planet.

Hope you enjoyed the uranus facts for kids. Must visit the website of NASA to know more.