Let’s explore flying spiders, how to get rid of spiders, do spiders poop, does raid kill spiders and many more things that you should know.

Flying spiders don’t have any wings, or even skin stretched between extended fingers like bats that would enable them to fly. But they can travel a great distance even when there’s no wind.

These spiders are colloquially known as flying spiders as they move from one place to another.

Flying spiders 2020 have been found in the city of Chicago, Texas, and other parts in the USA during June-August. Scientists have found a species of flying spiders, which is thought to be the first arachnid capable of gliding through the air.

According to Stephen Yanoviak, a tropical arthropod ecologist, “We did not expect to see gliding behavior in spiders,”

“There are no winged spiders. Spiders don’t fly.”

Scientists say that It’s an unexpected talent for spiders, which have no history of either flight or wings, scientists say.

How do spiders make webs?

Are flying spiders 2020 a new breed of spiders?

NO, Flying spiders are NOT a new breed of spiders as they belong to the Larinioides Sclopetarius species.

How many legs do spiders have?

How many eyes do spiders have? 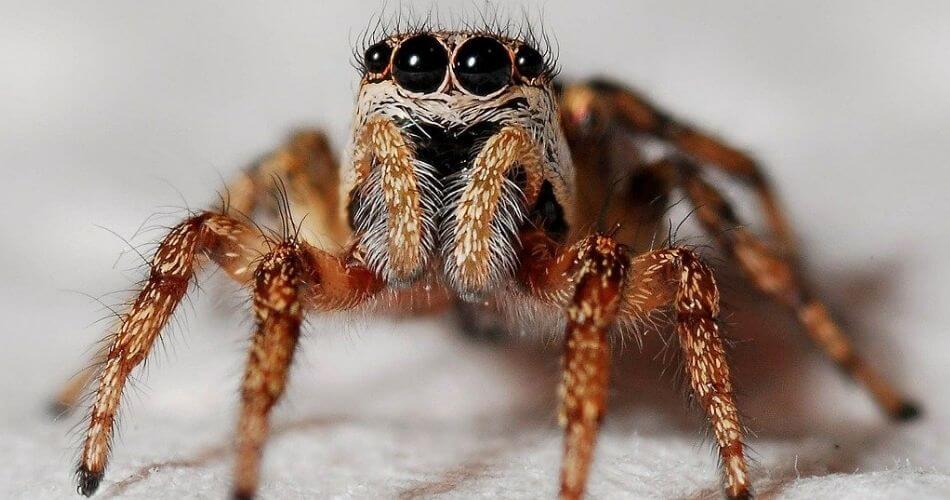 Most spiders have up to 8 eyes, but others have two eyes, while others have four. The specific arrangement of the eyes is one of the features used in classifying from one family to another.
There are over 34,000 species of spiders, and one of the ways we separate them into different families is by the number of eyes they have!

How long do spiders live?

An average house spider may live for about a year, but the females of some species can live for up to two or three years.

Did you know? Australian trapdoor spider has been recorded as the oldest recorded spider globally, which lived to the ripe old age of 43 before being killed by a wasp.

They do not sleep like humans but have their unique rest & activity way. Spiders have daily cycles of rest and activity. They do not close their eyes because they don’t have eyelids, but their body reduces activity levels and lowers their metabolic rate to conserve energy.

Yes! Spiders do poo. Similar to other creatures, spiders feed on a variety of foods. So, they defecate as a way of removing waste materials from their body.

A spider poop contains waste materials, semi-solid uric acid, which doesn’t dissolve in water. A spider poop looks like a bird’s poop but, of course, much, much smaller. Fresh poop will appear as a thick and creamy white liquid with black stains.

How to get rid of spiders?

There are a number of effective, lethal methods you can use to eliminate spiders from your home.

According to HomeDepot.com, following are the effective and lethal methods of indoor spider control.

Most spiders are predators and are known to eat a variety of foods. Web-building spiders commonly consume flying insects such as flies, mosquitoes, moths, butterflies, and even other spiders. But there are some larger exotic spiders which can eat small animals such as lizards, frogs, rodents, or birds.

Is spider a bug or insect?

Spiders are neither bugs nor insects. All Insects have three body parts: the head, the thorax with wings and six legs, and the abdomen.

Spiders are arachnids and have two body parts: the cephalothorax (head + thorax) with eight legs and the abdomen.

Yes, spiders do drink water. Like all other animals, spiders require a regular intake of water to stay hydrated and healthy.

Spiders have muscles that enable them to suck fluids. In the wild, most will drink from any available source such as droplets on vegetation or the ground, and then vacuum it up. Water running in sheets down tree trunks, water in shallow puddles, water in streams, etc. all can be taken up in the same way.

The sense of smell is very strong for the Spider. Although a spider does not have a nose but it has a way of identifying the scent of other things through chemical receptors that are located on the spider’s legs.

These are the plants that keep spiders away:

Hairspray can kill the spiders to some extent. When you apply hairspray on them, it restricts their legs’ movement because hairspray is full of oil contents. After that, you can squeeze them out using a fly swatter. But, it depends on many things like the brand of hairspray, type of spider, and also on your spraying skills.

Yes, Raid kills spiders, black widow spiders, and scorpions on contact and can be used both indoors and outdoors. But the size of the spiders determines how fast the Raid works. Small spiders die faster than tarantula sized monsters.

Wolf spiders (Lycosa) aren’t deadly to humans, but they can still bite and cause uncomfortable symptoms.

If you have a dream of spiders and are interested to know about its interpretation, you are in the right place. Just click here to know the meanings of spider dreams.