What is the Matter?

The matter is anything around us that takes up SPACE and has MASS. In other words, matter describes everything that we can see, touch, smell, or feel.

Did you know! The word atom is derived from a Greek word that means “CANNOT BE DIVIDED”. 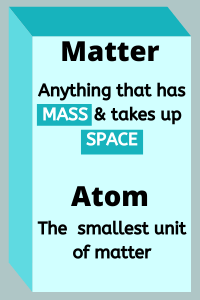 ✍ What is a matter made of?

“Matter is made of molecules and molecules are made up of two or more ATOMS.” Let’s understand with an example.

So, we can say that this sentence is made up of words and words are made up of letters.

Let’s take another example. As we know that water is a matter. 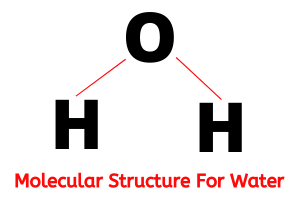 ✍ What are atoms made up of?

Nucleus is the center of an atom consists proton and neutrons.

For further information on the atom, Go Here. 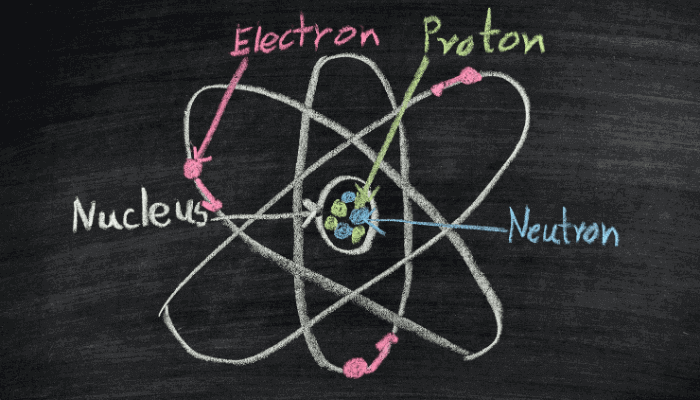 Mass is the amount of matter in an object. It is a combination of the total number of atoms, the density of the atoms, and the type of atoms in an object.

Mass is measured in kilograms (kg), or grams (g).

Volume is the amount of space something occupies. For an example a soccar ball takes up a large volume while a tennis ball occupies a small volume. Different states of matter will fill volumes in different ways.

✍ What are the different states of matter?

Mainly there are three states of matter.
– Solid,
– Liquid,
– Gas.
Apart from these, there are two more states are:
– Plasmas, and
– Bose-Einstein condensates (BEC). 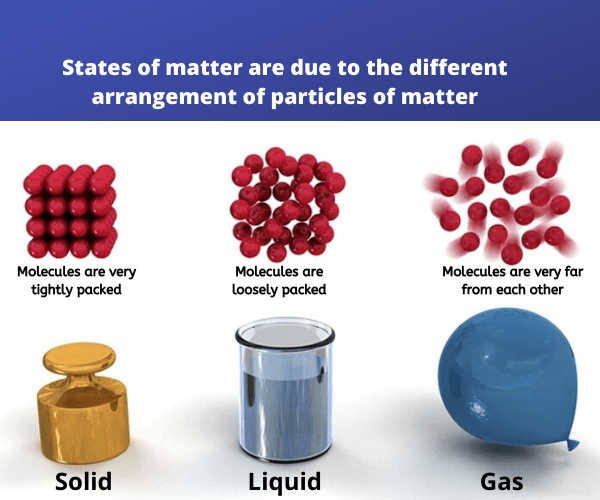 A solid is a matter that has a shape that does not change. For example, a pencil is solid. It has its own size and shape. It cannot be changed unless you break or cut it. So, A solid has a definite shape.

Why solid has a definite shape?

As we know the matter is made of molecules and molecules are made of atoms.
The molecules in a solid are very tightly packed with each other. They hold each other very tightly. It means there is a strong force of attraction between them.

A solid has these three main properties:

Liquids do not have their own shape but take the shape of the container they are in. For example, water, juice, milk are liquid.

Why liquid has no definite shape?

The molecules in a liquid are much further apart than in solids and can move around easily. They hold each other loosely. It means the force of attraction in liquids is weaker than it is in solids. Therefore liquids have a definite volume but they do not have a definite shape.

Gases are free-flowing. Like steam, the air is the gas. The molecules in a gas are very far from each other. They hold each other loosely. The force of attraction in gas is very weak. That is why gases have neither a definite shape nor volume. Gases fill all the space or volume of a container irrespective of the container size.

Plasma is the fourth state of matter on Earth. Plasma is created by adding more and more heat to a gas so that some of its electrons leave its atoms.

As we have read that atoms are made of electrons, protons, and neutrons. In Plasma state of matter, electrons escaped from their respective atoms.

Plasma is neutral because it has an equal amount of electrons (-) and protons (+). That is why plasma can conduct electricity.

This state of matter is completely opposite to the plasma state of matter. Plasmas are extremely hot and super excited atom, and on the contrary, atoms of Bose-Einstein Condensate (BEC) are un-excited and extremely cold.