What Is the Respiratory System?

The Respiratory System is an organ that allows us to breathe in and breathe out. If we didn’t have the respiratory system we would not survive.

This vital organ brings oxygen into our body and at the same time it takes out carbon dioxide. The part of our body that handles the breathing process is called the respiratory system.

What Is Breathing? (Respiratory System Function)

Breathing is the process of pulling air into our body by nose or mouth and then letting it out. Our body needs oxygen to obtain energy to fuel all our organs.

Did you know? The average person breathes in the equivalent of 13 pints of air every minute and takes 17,000 breaths per day.

Most people can hold their breath for a maximum of 1-2 minutes but in 2010 Stig Severinsen from Denmark held his breath during a free dive for 22 minutes. That’s the power of controlled breathing(source). 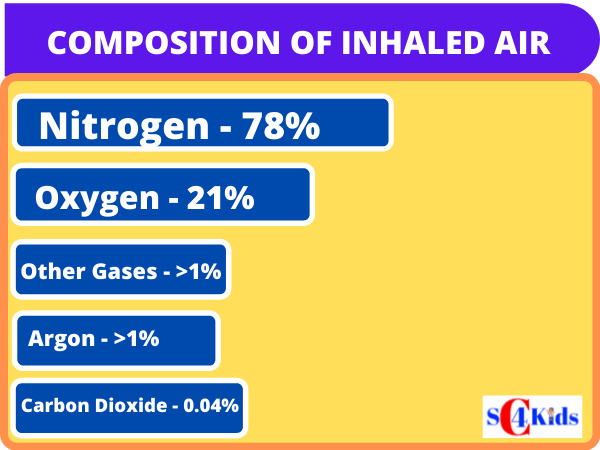 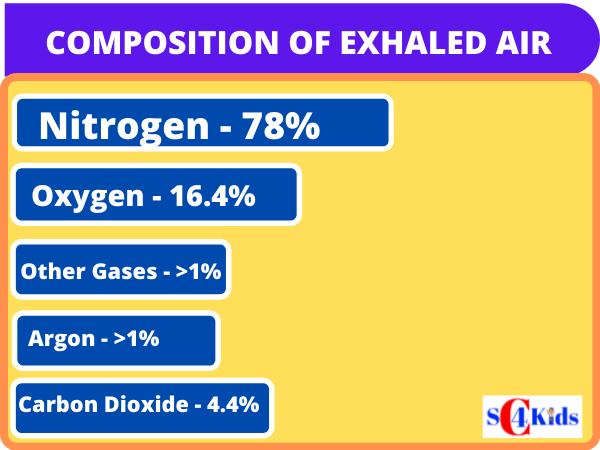 What are the parts of the Respiratory System?

These are the main parts of our respiratory system which helps us to breathe in and breathe out.

How Does the Respiratory System Work Step by Step?

Following are the steps of our respiratory system function –

STEP 1. Respiratory process starts from our nose or mouth when we inhale air / breathe in.

STEP 2. The oxygenated air goes through the Pharynx that is also called Throat. The Pharynx is connected to the nose/mouth to the esophagus.

STEP 3. The air goes down to the Larynx, also called the Voice Box. The Larynx forms a passage between the pharynx and trachea.

STEP 4. Now it travels down to the Trachea, also called Windpipe. Trachea or Windpipe is a tube which connects the larynx to the bronchi of the lungs.

STEP 5. Now air goes to the Bronchi. TheTrachea branches into two Bronchi each leading into a lung. 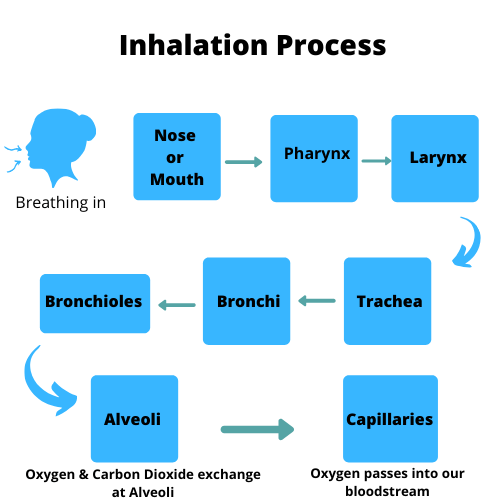 STEP 7. Now air moves into alveoli which is located at the end of the bronchioles. These are filled with air (air sacs) where gas exchange occurs.

STEP 8. The alveoli are surrounded by tiny blood vessels called capillaries. Here, oxygen from inhaled air passes into our blood.

STEP 9. At the same time, carbon dioxide moves in the opposite direction, from capillary blood to the alveoli.

STEP 10. The carbon dioxide inside the lungs is pushed up through the bronchioles and trachea and leaves the body through our nose and mouth.

What are the Respiratory System Function?

Following we will understand about the respiratory system function –

Air comes in through our nose and encounters little hairs that moisten it, heat it and clean it to keep dirt out of our lungs.

This is a tube connecting the nose/mouth to the larynx and the esophagus. It is commonly referred to as the throat.

For the digestive system, it helps in the process of swallowing by serving as a pathway for the movement of food from the mouth to the esophagus.

It is a tube connecting the pharynx and trachea.

With the help of epiglottis, Larynx prevents food from entering the windpipe (trachea).

Epiglottis is a type of lid that prevents any food item or fluid from entering the windpipe when we swallow something. It also helps with breathing and making sounds.

The Trachea, commonly known as the windpipe, is a large tube connecting the larynx to the bronchi of the lungs.

It provides air passage to our lungs for respiration, i.e. to inhale air rich in oxygen and exhale carbon dioxide. With the help of a sticky mucous lining, the trachea traps foreign substances and prevents them from entering.

It delivers air from the upper respiratory tract (nose, throat, and larynx) to the bronchi. It divides into the left and right bronchi of the lungs.

Lungs are the most important organ in respiration. The lungs are paired, cone-shaped organs which take up most of the space in our chests, along with the heart.

But both lungs are not equal in size. The left lung is slightly smaller than right, allowing room for our heart.

The primary function of lungs is to bring in air from the atmosphere and pass oxygen into the bloodstream while taking away carbon dioxide, which is released into the air when we breathe out. 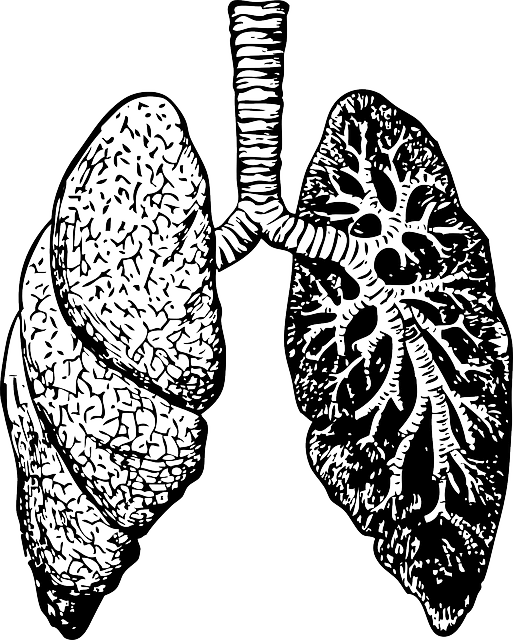 Inside the lungs, the bronchi divides into smaller branches called (bronchioles). At the end of the bronchioles, there are air sacs called alveoli, and this is where the important work of gas exchange takes place between the air and our blood.

Alveoli helps to get oxygen into the bloodstream for transport to the tissues, and to remove carbon dioxide from the bloodstream. Each human has around 600 million individual alveoli.

The alveoli are surrounded by tinier blood vessels called capillaries where oxygen passes into our bloodstream.

Carbon dioxide moves from the blood through the walls of capillaries and alveoli in order to be expelled by the lungs.

Diaphragm is a layer of muscle located between lungs and abdomen . It contracts and flattens when we inhale and exhale.

When we breathe in (inhale), our diaphragm contracts and flattens, creating a vacuum effect that pulls air into the lungs

The opposite happens while we breathe out (exhalation), our diaphragm relaxes upward and the air is pushed out of lungs, allowing them to deflate.

What is Inhalation and Exhalation?

Inhalation and exhalation are how our body brings in oxygen and gets rid of carbon dioxide. The process gets help from the diaphragm.

FACT 2. When our brain senses a shortage of oxygen, it triggers us to take a long deep breath…or to YAWN.

FACT 3. The lungs are the only organs that can float on water.

FACT 5. Horses only breathe through their noses, not through mouth.

FACT 6. There are more than 200 viruses that can cause a cold.

FACT 7. Our nose is actually a filter, heater and a humidifier.

FACT 8. It is possible to live with just one lung.

FACT 10. Lungs aren’t the same size. To accommodate the heart, the right lung is larger than the left lung.