What is the Nervous System?

The nevous system is very important to the body. The nervous system is a complex network of billions of nerve cells, (or neurons) that gathers and relays information about your surroundings to your brain.

The nervous system carry messages between our brain and spinal cord to various parts of the body. It is made of the Brain, Spinal Cord, Nerves and all the sensory organs

What is the difference between NEURON and NERVE?

Nerves are the bundles of neurons or nerve cells that start at the brain and branch out to the rest of the body parts.

The neuron (also known as nerve cell) is the smallest worker (basic unit) in the nervous system. It sends and receives electrical signals.

The neuron is made up of a cell body called dendrites and a threadlike structure named axon. Dendrites bring electrical signals to the cell body and axons take information away from the cell body.

There are three types of nerves in the human body, sensory nerves, motor nerves and mixed nerves.

It is also known as afferent nerves, send messages to the brain or the spinal cord from the sense organs.

Motor nerves carry the messages in the form of a response from the brain or the spinal cord to other parts of the body such as the muscles and glands.

Mixed Nerves perform both the action of sensory nerves as well as a motor nerve. They transform electrical impulses from the central nervous system to the muscles of the body.

Structure of a Nerve

The structure of a neuron is made up of a cell body called the soma, dendrites and an axon.

The main role of the soma is to receive information. The cell body contains the nucleus and cytoplasm.

This is the threadlike structure attached to the cell body. The axon transmits information to muscles, glands and other neurons.

Another threadlike structure extending from the neuron cell body and carrying information from other neurons to the soma. At synapse, a neuron communicates with another neuron.

What is the difference between Axons and Dendrites?

Neuron communicates with another neuron at a point called Synapses. The point at which the Axon terminal of a neuron meets the dendrites tip of another neuron called synapses. There are so many tiny gaps that hold chemicals, called neurotransmitters.

Neurotransmitter chemicals transmit nerve impulses from one nerve to another or from nerves to muscle cells. 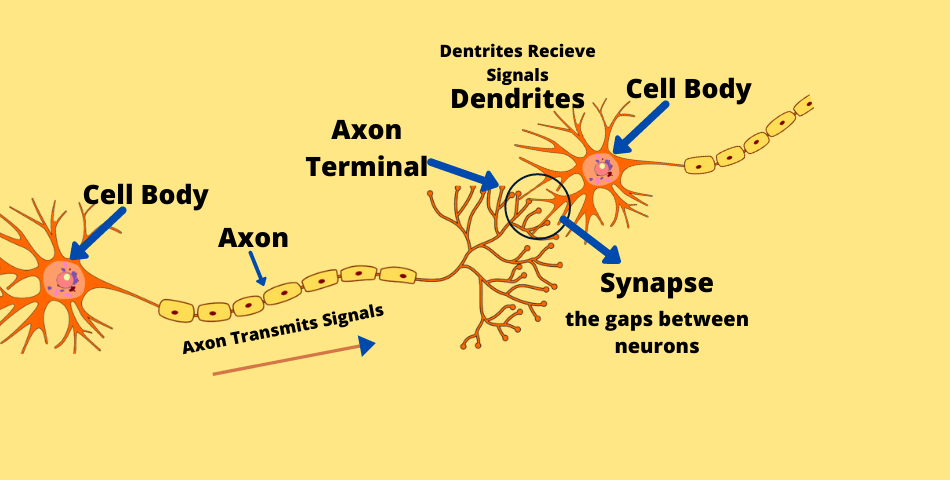 STEP 1. ➤ A Dendrites receive an impulse (signal) from another neuron, and they transmit the signal to the cell body.

STEP 2. ➤ From the cell body, an impulse (signal) transmits to the synapse through the axon. Once an impulse reaches the synapse, the axon releases a neurotransmitter chemicals from tiny gaps at the end of the nerve cell. This chemical helps the message reach the next neuron.

STEP 3. ➤ The chemicals move along to the next neuron sparking an electrical charge which moves the nerve impulse forward, and the process begins over again.

What are the Parts of the Nervous System? 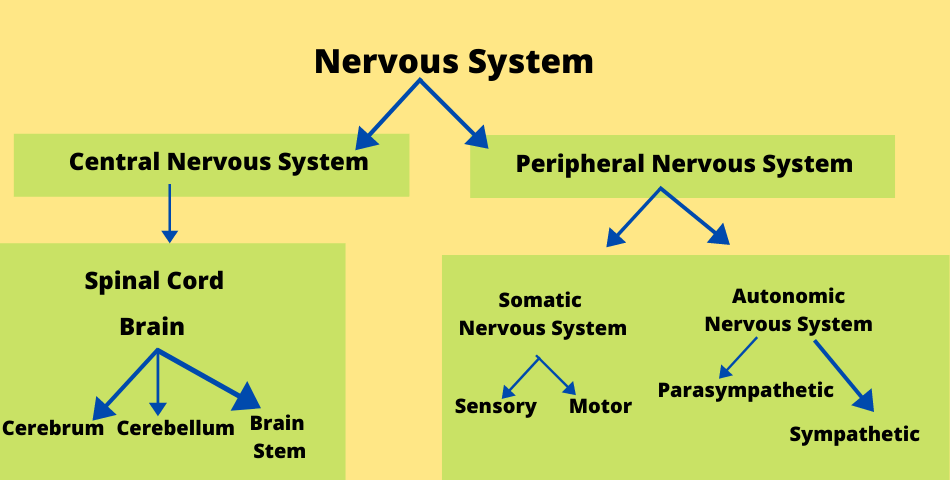 It controls the functions of the body. It is referred to as “central” because it combines all the information from the entire body and coordinates activity across the whole organism.

Organs of the Central Nervous system

It consists of the brain and the spinal cord. These organs of the central nervous system are located in the center of the body.

BRAIN – The brain is protected by the skull. It controls many of the body’s functions including sensation, thought, movement, awareness, and memory by sending and receiving messages through nerves.

There are mainly TWO parts of the Peripheral Nervous System:

THE SOMATIC NERVOUS SYSTEM – In greek word, ‘soma’ means ‘body’. It is mainly responsible for carrying sensory and motor information to and from the central nervous system.

THE AUTONOMIC NERVOUS SYSTEM – It is mainly responsible for regulating involuntary body functions, such as blood flow, heartbeat, digestion, and breathing.

The brain has THREE main parts: THE CEREBRUM, THE CEREBELLUM and THE BRAIN STEM.

THE CEREBRUM – The cerebrum is the largest as well as uppermost part of the brain. The cerebrum controls thinking, talking, remembering, and moving. When you solve a puzzle, draw a picture, play a video game, remember some memories, or dance, you use the cerebrum.

The cerebrum is divided into TWO HALVES, called HEMISPHERES. The left hemisphere and the right hemisphere.

Each hemisphere of the cerebrum is divided into broad regions called LOBES such as the FRONTAL LOBES, the PARIETAL LOBES, the TEMPORAL LOBES, and the OCCIPITAL LOBES.

THE BRAIN STEM – The brain stem is located just under the cerebrum. It controls a lot of the ‘automatic‘ actions of your body such as breathing and heartbeat, and links the brain to the spinal cord and the rest of the body.

You can also read here